Columnstore has quite a few different tricks for compressing data. This blog post explores if it’s possible for a rowstore table to beat columnstore compression, even in the best case scenario for the columnstore table (no delta stores and rowgropus of the maximum size).

Everybody knows that strings aren’t the best fit for columnstore tables. Let’s start by puting sequential integers from 1 to 1048576 into a page compressed table:

According to sp_spaceused, the table takes up 11464 KB of space. Next load the same data into a columnstore table:

The CCI takes up 14408 KB of space. The majority of the space is used for the dictionary. The follow query returns 11495348 bytes:

Data types matter here. If I change the CCI to have a VARCHAR(32) column instead then the table only requires 1800 KB of space. A dictionary is not created in this case. A takeaway is that SQL Server may choose to create a dictionary based on the length of the defined string column. Data sets with many unique strings may require a relatively large amount of space for the dictionary, even to the point where page compressed data can have overall a lower footprint on the database.

It’s certainly more difficult to come up with a demo that works without string columns, but consider how the page compression algorithm works. Data can be compressed on page basis, which includes both multiple rows and multiple columns. That means that page compression can achieve a higher compression ratio when a row has identical values in different columns. Columnstore is only able to compress on an individual column basis and you won’t directly see better compression with repeated values in different columns for a single row (as far as I know).

The table defined and populated below requires 11912 KB of disk space:

If I rerun the code with five columns, the table now takes up 13000 KB of space. That’s only an increase of 9% in space to hold 25% more data. The same data loaded into a columnstore table with four columns takes 11272 KB of space. Adding one column results in a total size of 14088 KB, which is almost exactly a 25% increase. For this data set with five columns, page compression across rows is more efficient than standard columnstore compression.

In this example, the rowstore table has a total size of 15496 KB but the columnstore has a total size of 16840 KB. I’m honestly not sure why this happens. I did try to pick the unfriendliest data set to columnstore compression that I could: no repeated values and no obvious patterns in data. Perhaps there’s some additional overhead of compression that pushes it over the row compressed data.

Columnstore doesn’t guarantee better compression than rowstore, even with perfectly sized rowgroups. Rowstore can provide better compression ratios for string columns, tables with repeated values across columns, and in other uncommon scenarios. A summary of test results is here:

The differences are small per rowgroup, but they can add up as more columns and more rows are added to the tables. I’ve seen tables in the real world that ended up bigger as columnstore compared to rowstore, which is what inspired me to look for some of these examples. Thanks for reading!

Columnstore compression is complicated, and in some cases, surprising.

The source data for the CCI has enough rows to fit six perfect rowgroups. The ID column is just sequential integers from 1 to 6291456. The ID2 column is the ID column modulo 20001. Code to load the data into a temp table:

Here’s the table definition for the target CCI:

The reversal of column order is important for the demo below.

First let’s load the ID2 column the temp table into the CCI. The order of data can matter for compression so I have a superfluous TOP expression to force SQL Server to read the data in clustered key order.

The insert query takes 2765 ms of CPU time and 2771 ms of elapsed time on my machine. According to sys.dm_db_column_store_row_group_physical_stats each rowgroup has a size of 2098320 bytes:

Now let’s move on to a parallel insert query with MAXDOP 2. The purpose of the second column in the CCI is to make the insert go parallel on my machine. It’s possible that you’ll need to use trace flag 8649 or some other trick to get a parallel insert. Here’s the code that I ran:

The insert query now takes 3594 ms of CPU time and 2112 ms of elapsed time on my machine. The size of each rowgroup did not change. It’s still 2098320 bytes. Even though this is a parallel query there’s no element of randomness in this case. In the query plan we can see that the source table was scanned in a serial zone and round robin distribution is to used to distribute exactly half of the rows to each parallel thread.

This seems like a reasonable plan given that TOP forces a serial zone and we need to preserve order. It’s possible to rewrite the query to encourage a parallel scan of the source table, but that would introduce an order-preserving gather streams operator.

I’m not satisfied with the runtime yet, so I’m going to bump up MAXDOP to 3:

The INSERT took significantly longer than before, but we have 38X better compression compared to the table after the MAXDOP 2 query. What happened?

An interesting pattern for compressed data sizes appears when working with repeated integers for a single rowgroup. The query that I tested with was roughly of the following format:

Below is a contour plot that shows how the compressed size for a single rowgroup varies as the number of rows and the modulus value changes: 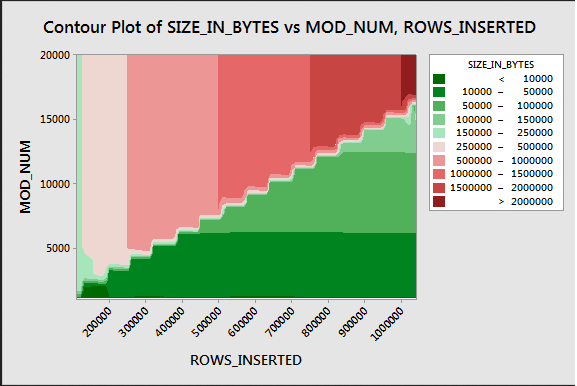 Values that are repeated 64 or more times seem to be compressed much better than other values. This pattern definitely doesn’t always hold as you add more columns to the table which is why I made the ID2 column the first column in the target CCI. Why is this pattern relevant to the previous example?

Now consider the MAXDOP 2 insert query. The ordered data from the scan is distributed using round robin distribution on two threads. For the first 20001 rows from the scan, thread 0 gets all even values and thread 1 gets all odd values. For the next 20001 rows, thread 0 gets all odd values and thread 1 gets all even values. This occurs because 20001 isn’t divisible by 2. For all six compressed rowgroups we end up with the same data distribution as we had when doing MAXDOP 1 inserts. It makes sense that the compressed size remained at 2098320 bytes.

This has absolutely no practical value. Thanks for reading!