Adaptive joins are a new feature in SQL Server 2017. For adaptive join operators the decision to do a hash or loop join is deferred until enough input rows are counted. You can get an introduction on the topic in this blog post by Joe Sack. Dmitry Pilugin has an excellent post digging into the internals. The rest of this blog post assumes that you know the basics of adaptive joins.

Getting an Adaptive Join

It’s pretty easy to create a query that has an adaptive join in SQL Server 2017. Below I create a CCI with 100k rows and an indexed rowstore table with 400k rows:

The full scan stats are just there to show that there isn’t any funny business with the stats. The below query gets an adaptive join:

It’s obvious when it happens in SSMS:

It’s possible to get an adaptive join with even simpler table definitions. I created the tables this way because they’ll be used for the rest of this post.

Unlike some other vendors, Microsoft was nice enough to expose the adaptive row threshold in SSMS when looking at estimated or actual plans: 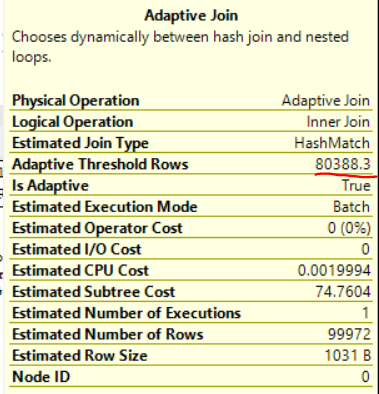 It was surprising to me to see so much variance for this query. There must be some overhead with doing the adaptive join but I wouldn’t expect the tipping point between a loop and hash join to change so dramatically. I would expect it to be close to a traditional tipping point calculated without adaptive joins.

Let’s disable adaptive joins using the 'DISABLE_BATCH_MODE_ADAPTIVE_JOINS' USE HINT and consider how an execution plan would look for this query:

The estimated costs for the two queries are very close to each other: 74.6842 and 74.6839 optimizer units. However, we saw earlier that the tipping point for an adaptive join on this query can vary between 22680 and 80388.3 rows. This inconsistency means that we can find a query that performs worse with adaptive joins enabled.

After some trial and error I found the following query:

The ORDER BY stuff isn’t important. It’s there just to not send any rows over the network. Here’s the plan:

The query has a cardinality estimate of 10777.7 rows coming out of the MY_FIRST_CCI table. The adaptive join has a tipping point of 27611.6 rows. However, I’ve constructed the table and the filter such that 28000 rows will be sent to the join. SQL Server expects a loop join, but it will instead do a hash join because 28000 > 27611.6. With a warm cache the query takes almost half a second:

If I disable adaptive joins, the query finishes in less than a fifth of a second:

A loop join is a better choice here, but the adaptive row threshold makes the adaptive join pick a hash join.

This post contains only a single test query, so it’s no cause for panic. It’s curious that Microsoft made the adaptive join tipping so dependent on cardinality estimates going into the join. I’m unable to figure out the design motivation for doing that. I would expect the other side of the join to be much more important. Thanks for reading!

2 thoughts on “An Adaptive Join Regression”